It was suggested a couple of days back that I could provide articles about various aspects of Kenilworth’s history to keep Vibers entertained and informed during the lock down. As it was Ananda Roy who suggested it, and requested information about the Common, that is the chosen first subject. It is a bit lengthy for a Facebook post, but I hope you enjoy working your way through it. Comments, and suggestions, are of course are most welcome!

Kenilworth Common was created in the enclosure award of 1756; it stated that “..forty acres of hilly waste ground are to remain as unenclosed and common land so that the poor of the parish should from time to time forever hereafter use exercise and enjoy a free and constant right to get furze, gorse or fern off the same”. ‘Waste ground’ can be interpreted as ‘not farmland’; also, at the time trees were few.

The Common was a rich source of sand and gravel which was put to good use in surfacing the local roads, creating a number of large, and small, quarries.

Then, in 1843/4, a huge excavation was made for the construction of the railway line, and the excavated material was used as the track base. Also, it is quite possible that the plateau on the eastern side of the railway was constructed, or at least used, as the site of a shanty town during the railway’s construction.

The trackway, starting at the ford crossing at Mill End up to what became Common Lane, was an accepted cart route from Kenilworth to Coventry, a more-or-less straight-line continuation of Albion Street.

In the later Victorian years adders, grass snakes, lizards and blind worms were plentiful but by the early 20th century were becoming increasingly rare, and in 1906 adders were declared ‘almost extinct’. French Partridge were another resident.

The excavations were becoming dangerous by the end of the 19th century; in 1894, five boys were buried by a landslide but were rescued more or less unharmed.

It was around the century’s end that the Common began to change with the landowner, the Earl of Clarendon, beginning to plant trees.

Kenilworth’s scout movement was started on the Common; by 1908, Engine Inn licensee Edwin Carter, a veteran of the Boer Wars, was taking local young boys onto the Common and teaching them his tracking skills; as camping was also allowed one can assume tents were set up too. These formed Kenilworth’s first scout troop.

Fires were a constant hazard, often started by cinders ejected from the chimneys of passing steam-hauled trains. One particularly bad fire in 1909 saw a team of locals cutting and dragging the gorse to slow the spread of flames, but the flames reached a height of 50feet, the top of an elm tree.

On Saturday 11th July 1914, the full contingent of 86 men, 4 guns, 4 ammunition wagons and sixty horses of the 4th Warwickshire Battery RFA made their way to the Abbey Fields to water the horses, and later took up positions on the Common and began “firing on an enemy at Gibbett Hill”. Negotiating the Common was no easy task, and great skill was shown particularly in negotiating the narrow and tight turn underneath the railway arches. One presumes they fired blanks.

In 1927, a visitor wrote: “The greatest part of it is covered with bracken at its very best, and standing on the hill in the midst of it all one can behold a beautiful sea of green. With the other features attributable to a country common – various foliage and wild flowers – the sight is a very picturesque one”.

In 1932, the Earl of Clarendon gifted the Common to the Kenilworth Urban District Council for the cost of the legal expenses. Normally quoted as being £200, it did in fact cost £226 5s.

In 1935 Sir John Siddeley, who lived alongside the Common at Crackley Hall, gave £50 to purchase trees to be planted ‘on suitable sites’, thus accelerating the demise of the Common’s heathland.

It was not until 1949 that removing sand and gravel finally ended, it is probable there was a revival during the war, and it was decided to make the excavations safe.

It became a favourite place for youngsters to race their bikes, and motorbikes too for older riders, and by 1955 a regular cycling event was established; this evolved into the annual cyclocross event that is still held.

I am uncertain if the rights granted when the Common was enclosed are still valid, but I remember in the late 1970s a grazing tethered goat in the area near to Common Lane.

Whereas trees were few a little over a century ago, today the last remaining minimal areas of heathland are protected as the common has become a forest; the plateau is now the only open space. Reptiles survive in small numbers but on a recent dawn walk I encountered a badger so a variety of wildlife still flourishes.

The image is taken from the KUDC minutes in 1932, recording the expense of the Council acquiring the Common. 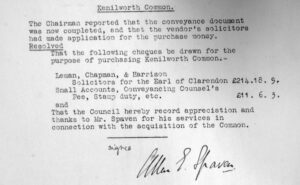